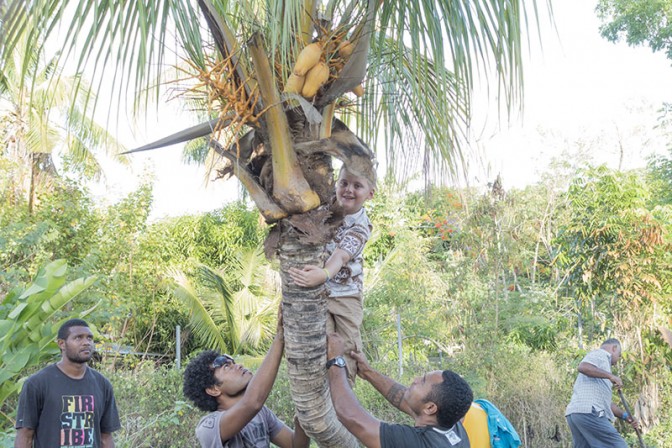 We were sad to say goodbye to Richard & Thelma Dingle this week, but we had fun at their leaving lovo where we got to eat some very tasty food and see some island dancing.

It was also a great opportunity to demonstrate how much this experience is maturing us.

This was followed the next day by a trip to Suva, the capital and largest city in Fiji. On the bus journey we had the pleasure of experiencing endless songs which had been ‘localised’ by the standard, unvarying Fiji Beat. Think Caribbean/80’s synthesiser overlaid on every song you’ve ever heard and you’ll get the idea.
The purposes of our trip were to visit Adam Atkinson (National Head of YWAM Fiji) and his family, to harass the individual(s) responsible for holding up Ane’s medical registration, to discuss how the various Fijian YWAM centres can improve their websites and also a spot of sightseeing. Bjarte, Dani and I stayed at the Atkinsons’ new house (having recently moved from Savusavu) and appreciated their kind hospitality. Dani and I got to take a walk around the coastline to look out over the South Pacific, and later took a walk around the Fiji Museum. The Fijians have a rich history, especially when it comes to sea travel, although it is intertwined with the practice of cannibalism which cost one missionary his life. Thankfully the influence of Christianity put an end to this and the inter-tribal wars.

On the business end, after some persuasion we were granted an appointment with the Assistant Director of Immigration who was very quick to encourage us. He had heard of YWAM and was pleased with the work that was being done here, and as a result wrote us a very helpful letter to support Ane’s registration. We took this to the Medical & Dental Council, who until that point had been somewhat hesitant to complete the process, and stated our case to them. We left uncertain as to whether any progress had been made, but the superb news is that three days later Ane was granted a three-month registration which should make further applications (relatively) hassle-free. A real answer to prayer after a long and gruelling process.

Before we left on the Wednesday a few of us sat round and talked geek (Adam’s words). We discussed how we could best represent our activities and roles as well as supporting each other through our websites. Apparently around 95% of younger people will use the internet as their means of researching opportunities through YWAM so it is important that we display an accurate and positive account of what we do online if we want to draw people to Fiji to learn and serve.