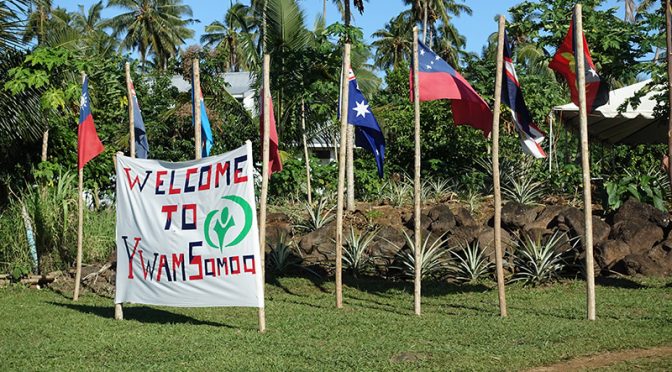 Shortly after the rewarding conclusion of DTS 2016 and our goodbyes to the students, we stepped on a flight to the island nation of Samoa. Our purpose was to join the YWAM Pacific gathering, have a rest, and renew our visas. Having had minimal time to prepare for the trip we arrived with little in the way of expectations – however even the ones we had were turned upside down as we spent a week immersed in full island culture with a YWAM twist!

The Samoa base lies in the hills close to the capital city of Apia. It is a fairly large plot of land with several fales for housing their staff of about 30. This base is particularly interesting since it is almost self-sustaining, having its own farm (pigs, chickens, fish, fruit & veg) as well as a Biogas waste disposal system which converts human and animal waste into gas used for cooking. They are also in the process of installing solar panels to provide electricity. This not only benefits the base and its environment, but serves as a training ground which will lead to other YWAM locations adopting similar eco-friendly systems. It is wonderful to see YWAM at the forefront of sustainable and renewable energy projects in the islands.

Appearing at the conference were representatives from Papua New Guinea, Tonga, Cook Islands, Solomons, Vanuatu, Palau, New Zealand, Hawaii, Samoa and of course Fiji. What a privilege it was to see and meet people from these nations, some of which are so tiny they are not even marked on world maps. Despite the small populations, the culture and history of these peoples are rich with people living from their roots, remembering their forefathers and the links between the island nations. For someone who is not entirely sure which nation is home, it was an eye-opening (even envy-inducing?) experience in observing the celebration of belonging.

There was a schedule of sorts, written by hand and stuck to a wall somewhere, but in true hot-climate culture style it was forgotten by the first morning. There was some talk of having a busy week ahead and lots to fit in but I realised by day 3, when I was wondering when the real conference was going to start, that this was in fact the main event. It was not a conference to fill the mind, but to fill the heart. Instead of teaching there was singing, dancing, praying and sharing of stories.

On some occasions the gathering launched into spontaneous forgiveness ceremonies. These are a concept not really known to us from Western Europe, but quite commonly performed here. Someone will feel burdened about a wrong that was committed in the past and will ask forgiveness to present day representatives on behalf of the sins of his or her nation and forefathers. These speeches are often deeply heartfelt and received with emotional responses. There is a sense of healing taking place which I can’t explain as, coming from an individualistic culture, the gesture seems largely symbolic to us. So we had apologies from the men towards the women, forgiveness between nations for acts committed many, many years ago, as well as reconciliation between Palagis (white foreigners) and islanders.

Hinrich Kraenzlin announced the dissolution of the Pacific Leadership Team, with the aim of falling more in line with YWAM International’s style of flat leadership and circles instead of pyramids. His welcome words also captured something of the theme of the conference. Using the fern as an example, where a branch has to die before a new one can grow, often something in our lives needs to die before something new can arise. Incidentally we had received a thoughtful email from one of our generous supporters on this topic some weeks earlier. He commented on how the church is adept at running programmes and outreaches, but without the power and direction of our Lord our work can become stale and driven by habit rather than need. Have our past experiences given us an inflexible approach to ministry, relying on the programme more than God? Or on the contrary, are we prepared to persist with God’s calling in difficult or seemingly dry times? Or possibly most difficult in our organised, scheduled way of life, are we prepared to put aside structure and give Him increased space to work (something we are learning from the Islanders)?

For the most part we found ourselves quiet and slightly detached observers, not being able to touch the significance of what was happening except as privileged witnesses. In some moments I wondered at how their national celebrations seemed to enlarge their tiny countries into something of global significance, but then I was reminded of Jesus’ story of the lost sheep – God is seeking all people groups, even those which are easily forgotten. What is more, we know that the wider world can be blessed through experiencing the treasures of their cultures, as we have been.

Spending time and listening to representatives from the various nations has further highlighted the extent of need in the Pacific. Thank God for hope! Thank God for joy and laughter and rest amidst the storms of life! We certainly experienced that during our time in Samoa. Despite the passing away of a dearly loved family member and not being able to attend the funeral, we felt blessed by the refreshing we received, both at the conference and the few days we had afterwards. To all who have urged us to take time for ourselves, thank you, it was good advice! We travelled to the incredibly laid-back island of Savai’i and had a fun time together, going for walks, reading books and spending time in conversation (both meaningful and plain silly). In other words, we started to remember ourselves again…