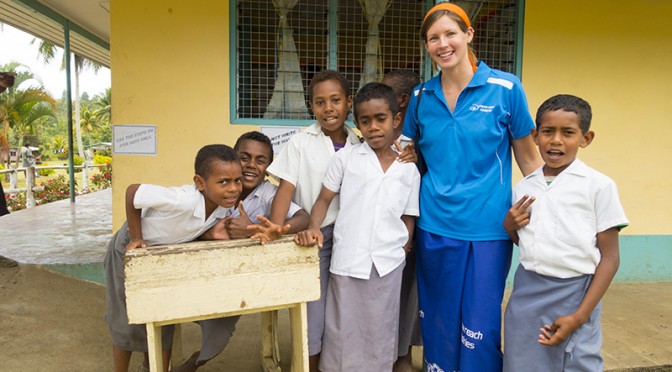 First of all we would like to say Vinaka Vaka Levu (big thank you) for all the encouragement we’ve received after our last update. We so much appreciate your comments and prayers – the sense that we are connected to a wider network of people outside of this little island nation.

Last month we had the pleasure of being part of a superb international team outreach. I don’t know if it was the fruit of our invested energy over the past year, the increased practical and spiritual preparations or the wonderful team of overseas volunteers, but we were all in agreement about the good work and fulfilment this outreach achieved.

For the first week we returned to Namara, where we had spent a part of our DTS outreach in July (see our post ‘DTS = Die To Self’). It was great to build on existing relationships, offer people quality medical and dental care, and also function as a live demonstration of how we, as strangers from different nations and different churches, can work in unity. In a village with large church splits and animosity between the denominations our example stood in plain contrast.  A particular encouragement was when we discovered that one of the church pastors had based his entire sermon on love using the example of our team, especially the way we pay our own way and showed such compassion in our serving.

The following week we spent time in Nalalawa, which we discovered was the official ‘centre’ for Scientology in Fiji. Our days were busy and satisfying. Aside from the normal teeth-pulling, Ali also had the opportunity to discuss the nature of Scientology with the pastor involved. There is very little understanding of what Scientology is, and how it stands in direct contrast to the heart of the Christian message.

Other outreach highlights included daily swims in the river in Namara, showing a movie of Jesus’ life in Fijian to a village that doesn’t even have television, being invited as guest of honour to the local school’s Fiji day celebrations (Bjarte did an excellent job of delivering a national pride-invoking speech), celebrating two team members’ birthdays with chocolate and cake, and… (for Ali, at least) not a single bed bug bite! We also had Gyu, a visitor from Korea, with us who took plenty of great video footage, allowing Ali to piece to together a new informational video for the organisation – see it here.

Since returning to Lautoka we’ve started more preparations for next year’s DTS, had a few days of fantastic teaching by Adam and Kim Atkinson from the YWAM Fiji National Office, enjoyed Diwali celebrations from the roof of Daeseong and Rowena’s house (about a zillion fireworks and lights all over Lautoka), and have been engaging in regular visits to the hospital just to talk and pray with patients. Alyse, a volunteer from Canada has even been making banana cakes to give out to a number of delighted patients.

YWAM Fiji has also just added another string to its bow – we have been gifted the use of the yacht ‘Mandolin’ for the next four years to be used as a means to access the particularly remote islands of Fiji that even larger boats have trouble reaching. It will be kept under the capable supervision of Adam at the National Office, but Ali was able to get a sneak preview!

The time has also come to bid a farewell to Greg and Karen as they are leaving for pastures new. They have been involved with Marine Reach Fiji on and off for about seven years now, so they had certainly earned the send-off we gave them on Friday night. We wish them all God’s blessings for what is ahead.

This week we will return to Ben and Kaba’s village to conduct a one-day outreach as part of our ongoing relationship with Naviyago village. Then, on the 21st, we will be packing our bags and returning to the UK for the Christmas period. We are looking forward to catching up with familiar faces and sharing more of the exciting things God has been doing in Fiji.

And finally, if you needed evidence of how hot Lautoka is getting right now: on discarding his broken flip-flop/thong/jandal our dear friend and co-Director of Marine Reach Fiji, Bjarte Haugstvedt, walked the few hundred metres into town to buy replacements, but by the time he arrived he had managed to badly blister the sole of his foot on the hot pavement during his brief barefoot march. Toasty!

9 thoughts on “Heating Up”