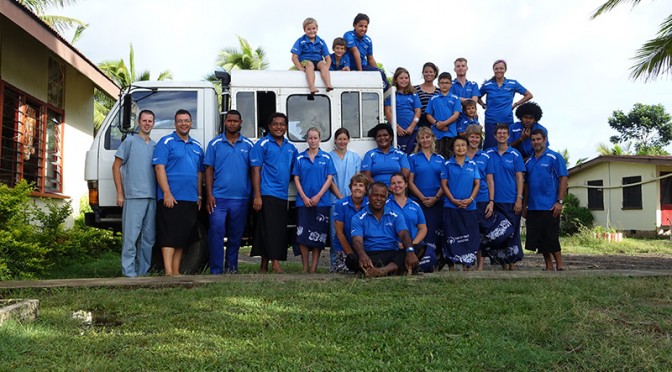 A big thank you to everyone who has supported us this last month, we’ve so very much appreciated all your encouraging thoughts and prayers! It has truly been a bit of a whirlwind 🙂

Barely having surfaced from the daze of jet lag we found ourselves on our second international team outreach. During the briefing we had Mike, an Australian mental health nurse working in Fiji come to talk to us. The statistics for depression and suicide are pretty shocking, with Fiji having the 3rd highest rate of suicide in the world. It is an immense task to change attitudes and provide care when people still see these illnesses as being the result of evil spirits.

The next day we travelled to our first village. Keiyasi lies deep in the interior of Vitu Levu, surrounded by beautiful green hills and a big brown river. We were offered the Chiefs’ house as our accommodation which meant access to a flushing toilet, kitchen and even a fan. We still had to battle an array of wildlife including mosquitos, bed bugs, fleas and rats, but sleep still won. Another story for the grandkids perhaps.

The village was serviced by a nearby health centre which we had the chance to visit on a couple of occasions, talking to the nurses and resident doctor. They described two main health problems. The first is that the people tend to place health as a low priority. Most important are social and physical functioning, and only when they are impacted by ill-health do the people seek medical care. This has significant consequences for the management of chronic diseases such as diabetes and high blood pressure, where both attendance at appointments and compliance with medications is vital to avoid complications. The second issue is transport of sick patients. Only the week before they had seen two patients die whilst waiting for the ambulance to the nearest hospital.

For our clinic, thanks in part to the nearby health centre, the days were fairly civil. The team had five doctors which meant we could spend more time on health education and take the time to uncover deeper problems such as potential mental health issues. Even Ali, who held up the dental side as a one man show, thankfully wasn’t overwhelmed by endless queues of patients.

A day or two into our stay the first cyclone warning came. We discussed whether to move out of the village, as flooding or blocked roads could result in us being stranded there with limited food. Ane, as outreach leader, took the wise approach of taking things day by day since Pam appeared to be moving slowly. We followed the updates continuously and it wasn’t until Friday, when the schools were ordered closed, that we moved out. Ane also shared with us all a strange prophesy that a visitor had had for Marine Reach in November of last year. The picture was that of our medical truck surrounded by strong hurricane winds, but the hand of God protecting it. At the time it was a strange picture, because why would we be on outreach in the middle of a cyclone? Yet here we were.

Pam hit us overnight on Saturday. We had moved to stay in a school in Lomawai village, an Indo-Fijian village on the coast. Even hundreds of kilometres from the eye, the roar of the storm was incredible. The next morning I (Dani) rose early to find a grey but still sky, the only evidence of nature’s power being palm branches strewn across a soggy field. Then news arrived of deaths in Vanuatu, and an uneasy feeling weighed on my mind; why were we protected and they were not?

One thought on “Blown Away!”