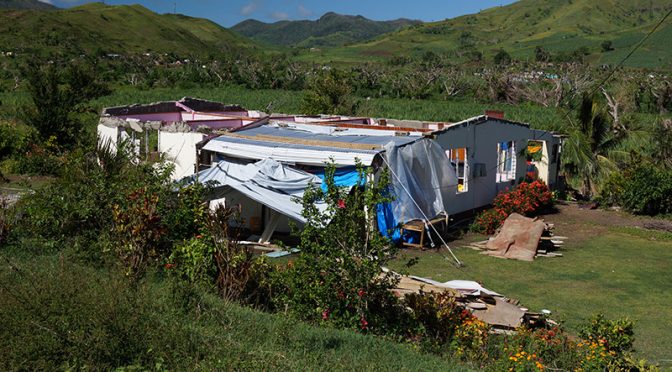 It had been arranged for us to use the community hall for all of our needs – sleeping, cooking, eating and running the clinic. This is unusual, but due to the lack of housing following the cyclone it would be a necessary inconvenience. So when we arrived at the village and had been told that the community hall would be occupied for a church meeting that week we were rather dismayed! Unfortunately incidents like this are not uncommon in our experience and we have learned to trust God that even when human disorganisation gets in the way His plans are not so easily thwarted.

It was suggested we should go to the local school instead as they were on holiday, and so we travelled back along the road for half a kilometre. There, despite some cyclone damage, we found that the school had a large classroom to use as a clinic, a separate kitchen, dorms to sleep in and, most importantly, working showers and toilets! Such a blessing and a relief. We were concerned that being slightly away from the village would mean less people turning up for the clinic but our worries were unnecessary. From the very first morning we had a steady stream of local Fijians coming to have their medical and dental needs tended to.

The students took turns with the various duties – registering patients, taking blood pressure and sugar readings, ministering to those in the waiting area and visiting nearby houses. They all rose to the challenges set before them, resulting in the clinics running well and a steady flow of worship music coming from outside, which always makes our work more enjoyable.

As we suspected, there were people still affected by the trauma of trying to survive through the cyclone, now almost three months prior. Some of the team visited a nearby village where only two (government-built) houses were still standing. Everybody else was living out of tents provided by disaster relief organisations. Recovery had been slow and they were still waiting for the first crops to appear since the rain destroyed everything that was growing. There were plenty of stories of people having spent the night hiding beneath floorboards, running from place to place for shelter, and being injured by flying debris.

We heard many sad stories of loss and fear. One father told us that his child had forgotten all he had learnt in school after the cyclone. Others describe their children becoming fearful when the weather is windy, thinking it’s another cyclone coming. We had the opportunity to conduct a basic needs assessment for the Ministry of Health, and found that many people still lacked adequate shelter, clean water, seeds and mosquito nets. There is also a rising number of cases of Zika virus here in Fiji, as well as the normal dengue and typhoid.

Since the school holidays were for just one week we had to find an alternative venue for the second half of our medical outreach. Thankfully the nearby village of Vunisea invited us to relocate there and so we moved our clinic just a few kilometres away. Although Vunisea is quite small, they welcomed us with big hearts and it was an easy transition into the next week of clinics. Patients continued to appear from all directions, and in the evenings we had both a community worship night and a viewing of the Jesus movie on projector. Given that they haven’t had electricity there for months it was no surprise to see them enjoying it.

The village seemed to be profoundly impacted by our visit there, and it was obvious God was moving. One of the more memorable events was an elder in the village coming to tell us that he had experienced a dream the previous night, where he saw Jesus walk down a staircase from heaven into the village. This was something he had never experienced before and was not just a normal dream – he was visibly affected by it.

We were given a loving farewell as we left to return to Lautoka, but we are very happy to report that since then a visiting team from Perth, Australia went to Vunisea in the last few weeks and continued to share more about God with them. They too felt that an impact had been made by the Marine Reach outreach there, and we are trusting that God will continue to touch their lives for a long time.

One thought on “Back To School”